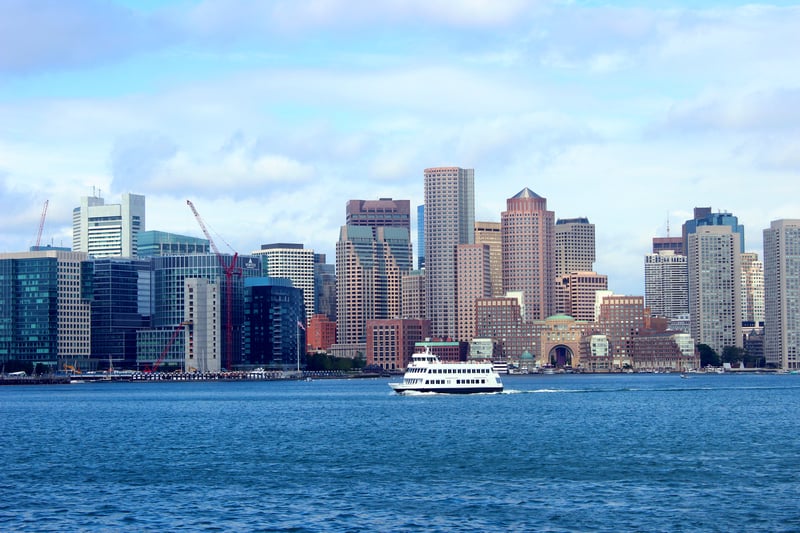 The Ultimate Guide to Cruises from Boston

Boston is essentially a summer cruise port (and if you’ve ever visited “Beantown” in January, you’ll understand why!) Cruises from Boston usually start in April and run until early November when cruise ships reposition further south for subtropical Caribbean cruises during the winter months.

Located in South Boston’s historic Seaport District, Flynn Cruiseport is the hub for the gleaming mega cruise ships that carry over 300,000 passengers on luxury cruises every year.

Destinations and ports of call on Boston cruises offer a diversity of attractions.

Whether you’re into photography, watersports, historic homes and gardens, wildlife or great seafood, these cruises from Boston have something for everyone.

Cruises from Boston in 2020 will head to Canada, New England, Bermuda and further afield.

Scoot down the article and read about each port of call in detail before booking your next cruise from Boston. You’ll be surprised where cruises can take you!

Guide to Cruises from Boston Contents

Related read: The Ultimate Guide to Transatlantic and Repositioning Cruises

Located on the northern edge of Massachusetts Bay, the harbor and cruise port are conveniently just a stone’s throw from Boston Logan (BOS) International Airport.

Cruisers flying into Boston Airport are just a 10-minute taxi ride from the cruise port.

If you’re traveling to the port from the city, MBTA Silver Line Rapid Transit Service (bus) stops one block from the cruise terminal.

If you’re driving to Flynn Cruiseport in Boston, it is easy to reach from the east-west I-90 and the north-south I-95 and I-93.

If you’re arriving in Boston by car, you will need to park your car somewhere secure for the duration of your cruise.

You will also need a transfer from your vehicle to the cruise terminal, along with your luggage.

The easiest place to leave your car is at the official port garage as it is conveniently close to the cruise terminals, but it is not cheap.

If you book prepaid cruise parking in advance, it is $21 per day.

If you arrive without prebooking, it is $30 per day.

This includes a complimentary shuttle service to and from the ship.

Another option is to book a Park and Cruise package at one of the hotels in Boston.

If you are planning to stay the night before or after your cruise, a Park and Cruise package is often the best value deal.

All-inclusive packages offer a night’s stay for two in a double room, parking for the duration of your cruise and transport to and from the ship.

Check out the options and book your hotel and parking well ahead of your cruise departure to get the best deals. Prices are provided when you make your booking.

It includes overnight accommodation and free parking for up to 10 days.

In addition, they charge $10 per person for the transfer to the cruise port.

Alternatively, the DoubleTree by Hilton Boston Bayside is three miles from the cruise port.

The package includes free parking for 14 days and transport to and from the cruise port for two guests.

It’s smart to arrive in Boston the day before your cruise departure just in case there are any problems that might cause you to miss your cruise, such as flight delays, bad weather conditions or vehicle breakdowns.

Once in Boston you can fill your time seeing some of the historic sights and attractions close to Flynn Cruiseport.

Check out the historic Fish Pier – a great place to sample the freshest seafood that Boston is known for. New England Clam Chowder is a must along with gourmet seafood dishes.

Still on a foodie theme, you’ll find coffee shops, bars and pubs on every street corner in Boston.

It’s a great place to sample craft beers in a friendly, welcoming atmosphere.

Walk the Freedom Trail, a 2.5 mile red brick line that connects most of the historic locations relating to Boston’s history.

It starts in Boston Common, a peaceful park in the city centre and visits 16 Revolutionary War sites, churches, houses and graveyards.

Visit Faneuil Hall Marketplace, site of many speeches during the struggle for US Independence. It’s a beautiful building with food and market stalls inside.

Griffin’s Wharf is another historic museum and site of the restored Tea Party clipper ships.

Other Boston attractions include the Museum of Fine Arts, Fenway Park (home to the legendary Boston Red Sox), and the huge New England Aquarium.

There are also some smaller vessels that use Boston as their home port for their 2020 cruise itineraries. These include:

Take your pick from the following cruises from Boston (note that some companies might change these itineraries as years go on, this is current as of 2020).

During your cruise, keep your eyes peeled for water spouts denoting the presence of migratory Humpback and Wright’s Whales!

Check out what Bermuda has to offer including exclusive shopping and Bermuda rum!

Hug the coastline of New England ticking off the landmark lighthouses.

This itinerary has ports of call at Halifax, Nova Scotia; Bar Harbor, Maine; Portland, Maine; Martha’s Vineyard; Newport, Rhode Island (check out those fabulous mansions!) and back to Boston.

A third 7-day cruise itinerary from Boston takes in three ports in Canada and two in Maine.

On limited dates in August, the Zaandam will sail to Portland, Maine; Saint John, New Brunswick; Halifax and Sydney in Nova Scotia; Bar Harbor, Maine and back to Boston.

Ports of call on this back-to-back cruise include Bar Harbor, Maine; Halifax, Nova Scotia; Sydney, Nova Scotia; Charlottetown, PEI; Quebec City; Montreal and then back in reverse to Boston

You can also book the cruise with ports in reverse order ending back in Boston.

RCI Brilliance of the Seas

Ports of call on this popular itinerary include Portland, Maine; Bar Harbor, Maine; Quebec City; Charlottetown, PEI; Sydney and Halifax, Nova Scotia and back to Boston.

You can also enjoy shopping and dining in this charming port of call with its colonial architecture.

Take a guided tour of the Halifax Citadel National Historic Monument or spend time in the huge Maritime Museum of the Atlantic.

The Victoria Gardens and Peggy’s Point Lighthouse are worth a photo.

Portland has many fascinating things to see and do with its Old Port restaurants and shops, beautiful beaches and the historic Portland Head Lighthouse (circa 1791).

The sandy beaches have shallow waters for swimming and watersports.

You’ll want to check out some of the opulent mansions that this port city is known for.

isit the Breakers Vanderbilt Mansion and the breathtaking Beaux-Arts Marble House. Guides recreate the era when wealthy families competed to host the most lavish parties at these summer homes.

Said to be the “Birthplace of Canada”, Province House hosted the Charlottetown Conference in 1864 leading to the founding of Canada.

St Dunstan’s Basilica has outstanding architecture and nearby Cavendish was the setting for the classic novel Anne of Green Gables.

Step ashore in Sydney and take a guided tour of the island’s highlights.

It is home to the Highland Village which captures the history of the Gaelic settlement in this remote corner of Canada’s northeast coast. It is also home to the world’s largest fiddle statue (60 feet high) on Sydney waterfront.

If you need an added incentive to book a cruise from Boston, bear in mind that Flynn Cruiseport Boston supports 1,000 local jobs, generates $56 million of revenue for related businesses and contributes $23 million in federal, state and local taxes.

15 thoughts on “The Ultimate Guide to Cruises from Boston”